Getting married has implications for a couple’s ﬁnances and taxes. We look at different types of marriage contracts and what difference they make during a marriage and also when it ends in divorce or death.

According to Statistics South Africa. 45.4% of divorces recorded in 2015 consisted of marriages that did not survive their tenth wedding anniversary. 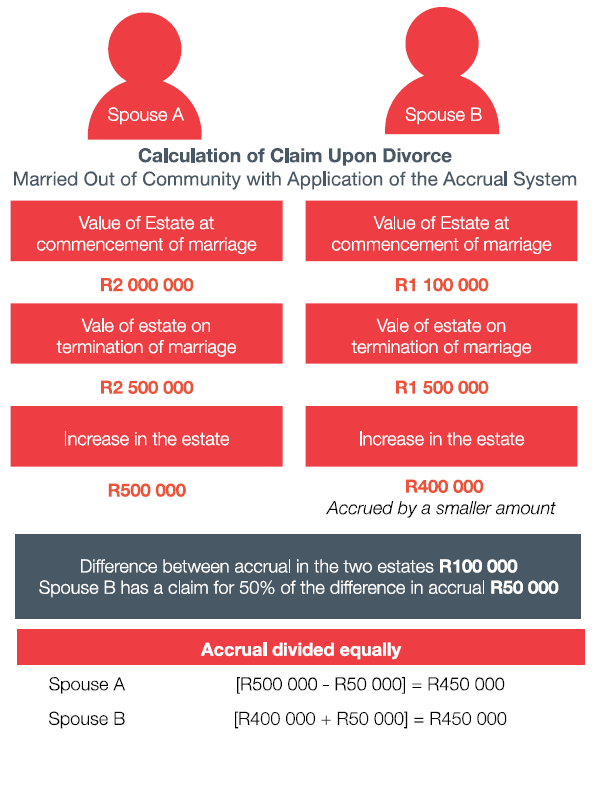 Marriage in community of property (ICOP)

Assets and liabilities held by each of the spouses prior to the marriage will be combined into a joint estate of the spouses. For tax purposes, SARS will regard each spouse as having an equal share in the joint estate and in any income, profit or loss flowing from the estate.

Marriage out of community of property (OCOP) with accrual

The nominal value(s) of the respective estates are declared at commencement of the marriage. The difference between the net increases in the value of the estates during the marriage will be divided equally between the spouses upon termination of the marriage. ln the example below, Spouse A’s estate increased by R500 O00 and Spouse B’s by R400 OOO. A smaller amount accrued to Spouse B’s estate and it therefore has a claim against Spouse A’s estate for half of the difference in accrual (i.e. R50 OOO).

For capital gains tax purposes, the accrual system does not result in a splitting of capital gains and losses between spouses. The spouse that owns the asset must therefore account for the capital gain or loss in respect of the disposal of the asset.

Marriage out of community of property with no accrual system

“What is yours, is yours, what is mine, is mine before and after the marriage” best describes this regime. Neither spouse will have a claim to any assets from the estate of the other, or to profit ﬂowing from those assets. 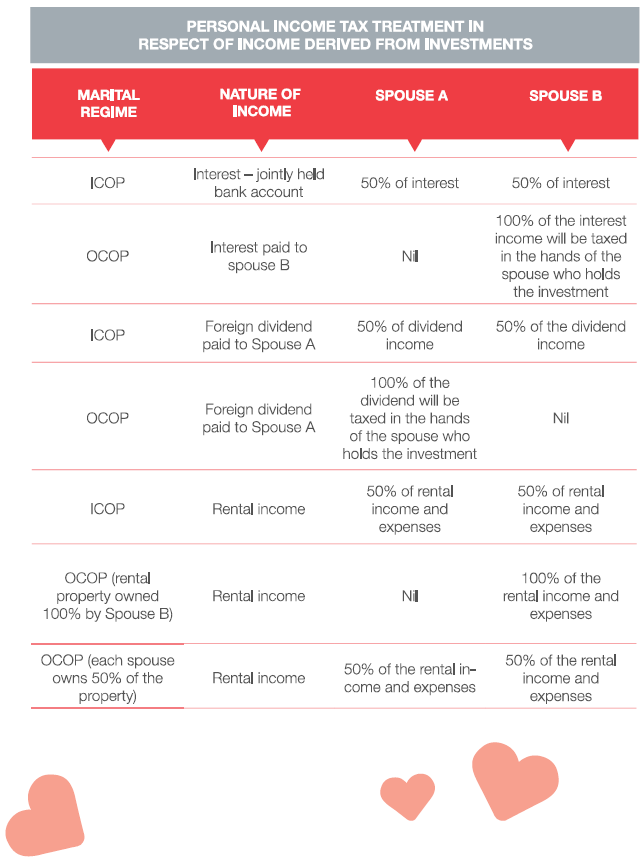 Common law marriages, also referred to as cohabitation or living together as a domestic partnership, are not recognised as legal relationships in South African law. Nonetheless, section 1 of the Income Tax Act deﬁnes spouses, for the purposes of that Act, as people who are married in accordance with the Marriage Act or according to religious rights or partners in a union that may be regarded as permanent. This suggests that a couple who have been cohabiting but have no intention of getting married are also “spouses” tor the purpose of the definition.

According to the definition in the Act, “spouse” means, “in relation to any person, a person who is the partner of that person–

The annual income return (ITR12) requires a taxpayer to indicate his or her marital status,

Taxpayers, whether married or unmarried, file tax returns separately. In this regard, remuneration for services rendered is included in the taxable income of the spouse who rendered the service.

Tax relief for transactions between spouses

Donations tax: Exemption exists in respect of donations between spouses.

Transfer duty: Not applicable to transfer of property upon death or divorce.

Estate duty: Not applicable in respect of bequest of assets.

Capital gains tax: Roll-over provisions in respect of the disposal of an asset. Recipient spouse is deemed to acquire the asset to a value equal to the base cost of the disposing spouse.

The divorce order should be reviewed regarding jointly held property, pension arrangements, alimony and maintenance. The ITR12 must also be updated.

Section 1O(1 )(u) of the Income Tax Act provides that any amount received by a spouse or ex-spouse by way of alimony or allowance or maintenance of such person under any judicial order, written agreement of separation or under any order of divorce, is exempt from normal tax. In this regard, the
settlement payment is not subject to tax.

Given the South African legal landscape coupled with fiscal laws, it is evident that a contract constituted by a marriage, or aimed at regulating one, gives rise to personal tax implications. These implications should be considered before entering into a marriage contract and exiting a marriage.